PORT HOPE – When a venerable old house must come down, it’s upsetting to see it just crushed and carted away in bits and pieces.

Rob Green of Green Bros. Construction much prefers the approach of dismantling it with care and reusing the materials. And he learned on a recent Port Hope job that he is not alone.

When the owners of a 148-year-old two-story brick house at 106 Bruton St. made the difficult decision that it must come down, in order to rebuild a new home and studio on the site, the neighbours were vocal in their displeasure. Once Green prepared a flyer explaining his approach, he encountered a 180-degree shift in attitude. People even came to the work site to show their support and say thank-you.

Green made the winning bid for the demolition job, but found the owners (and their architect Reno Picini) very receptive to his ideas — the job would still be within budget, but would require a couple of weeks instead of the single day it would typically take to raze a building flat.

“I had my guys take it down board by board, brick by brick,” he said.

When visited last week, the site contained any number of piles where recovered materials had been sorted and set aside for specific purposes. The aluminum waste, for example, will go to Wakely Disposals for scrap metal.

The roof rafters and roof boards will be reused in another building they are working on, as will the decorative Victorian front door. The pine floorboards were salvaged, cleaned and de-nailed on site, and will go into another heritage project of theirs.

“The floor joists will be remilled in our window-and-sash shop, to be remanufactured into window frames for historic windows,” Green added.

As he explained in a recent Northumberland Today story about a schoolhouse he was renovating west of Centreton, his company treats these old windows to make them more up-to-date. The old paint and stain are completely stripped, the single-pane glass and old weather-stripping are replaced with thermal windows. The old rope-and-pulley mechanism is replaced with a modern spring balance.

In the end, the old window looks the same, but opens and closes as smoothly as one could wish and more effectively keeps the elements at bay.

Some of the old wood, which he refers to as scrap wood or garbage wood, is not of sufficient quality to reuse.

“We are cutting it up for firewood, and grinding it up into wood chips to be used to heat our shop in the wood-chip boiler,” he said.

One thing that especially pleased Green was when he saw that the brick on the home was the rare Port Hope brick that was popular in the 19th century but is no longer manufactured in North America.

As he explained when interviewed about the Centreton job, this material was probably made in a Port Hope-area brick yard. It would have been good quality, though not the best, and it was used in a number of heritage buildings that still stand.

Having a new supply of Port Hope brick is a bonus, augmenting the Port Hope brick he managed to find earlier this year from a derelict drive shed west of Welcome. The owner had wanted it dismantled, and Green did the job free in exchange for the brick.

With his men carefully dismantling and cleaning each brick, the Bruton Street job has added 100,000 lb. of Port Hope brick to his inventory. About 60% of it is headed for a Toronto company called Historic Restorations to go into finishing up the one of the buildings in the historic Distillery District.

The other 40% will stay in Green’s inventory. About 1,500 of the bricks are bound for a project his company has been awarded, rebuilding the front of an historic Walton Street building, which won the approval of the municipality’s Architectural Conservancy of Ontario president Phil Carter

Even the brick and concrete rubble salvaged will go into another project as the base for a driveway — a good solid base to put gravel on top, he said.

The owners insisted on keeping a magnificent spreading 100-year-old chestnut tree. And though another tree was found to be dying and was taken down, the chestnut tree remains in place. And a number of cedar trees, which would typically be dug up and thrown out, have been replanted to fill in gaps in the hedgerow.

“The only thing we couldn’t salvage was the shingles. They went to the dump,” Green said.

But then, that one ton of shingles in the landfill is far preferable to the materials from an entire demolition project.

In the end, it was a three-week job. And thanks to the good work of site supervisor Russ Wright and his thorough safety training, Green is proud to say that his workers sustained not so much as a cut finger despite the hands-on nature of the work.

Green’s biggest hope is that his work will signal to others that this is a sound approach.

“It’s been a really pleasant experience from start to finish,” he said.

“What we are doing, I believe, pays a level of respect to the craftsmen who originally built the house. They put a lot of love and energy into building it. To come and crush it would be like crushing up a valuable painting.”

The neighbours obviously agreed and showed their approval by helping in various ways like lending a hose to water the tree and allowing them to tap into their hydro supply.

“The whole neighbourhood was extremely co-operative, extremely helpful. In their eyes, we are doing the right thing,” he stated. 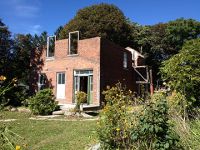