Rob Green — Proud to be a “Frugal Sawyer”

PORT HOPE – Thanks to the thoughtful creativity of two men — one in Toronto, one in Port Hope — vintage wood with a colourful history can find new life in homes and businesses across Canada.

Green had an inventory of rare Port Hope brick gathered from several sources, including an old drive shed on Dale Road he was dismantling and an old house he had demolished with an eye toward salvaging anything that could be reused.

When Green learned that the completion of one of the buildings in the Distillery district would require Port Hope bricks, he sent off 15,000 to 20,000 of them to Goad.

“He had a passion for salvaging derelict buildings, and I think he has a passion for the material it takes to do a good job,” Green said in a recent interview.

In return, Goad entrusted to Green the tight-grained vintage first-growth wood from the racks in some of his old distillery buildings.

The Distillery District was once home to the Gooderham and Worts complex on Toronto’s lakeshore. By the end of the 19th century, it was the largest distillery in the British Empire (in the world, by some accounts).

A dozen rack houses were built to store thousands of 500-lb. barrels of whiskey while they aged.

The distillery closed in 1990, but its beautiful buildings in their prime location remain. Now that they are being refashioned into studios, restaurants and other commercial enterprises, the racks have come out of the rack houses.

And Green has taken shipment of more than 400,000 board feet of old-growth Douglas fir that came to him on 31 53-ft. transport trucks.

Dave Horner of the Port Hope Rona has gone out of his way to help with this effort, providing the space for the wood and the work Green will be doing as sawyer. This includes milling and cutting the wood just so to fill the orders he will take to make it into everything from coasters and moulding to furniture, flooring, panelling and cabinetry.

“The mandate the owner of this material gave us is not to waste any of it. Put it to its best use,” Green said in a recent interview at Rona.

The challenge this involves emerged when they began cutting the material.

“It’s very difficult to maximize the use of this old timbre, with bolt holes, notches, cracks from uneven drying. When we cut it up, we saw that maybe 60% of the material is really good quality. The other 40% would typically be considered garbage wood, with no functional potential.”

Fortunately for Goad’s vision, Green considers himself a frugal sawyer who appreciates a challenge.

Some of the so-called garbage wood went to create display props, cut into pieces that were milled into various sizes and dimensions just to showcase the material. Green had the idea that some of the pieces could be used for door panels too, but it was clear further creativity would be needed.

He got some from Historic Building Supplies owner Paul Goldsmith (who recently did some of the work on Victoria Hall in Cobourg), who asked if they could use it to make nice wooden coasters. Another person had the idea to use laser engraving to dress them up a bit.

Green showed them around to a gift shop in the Distillery District, and a lady had the idea of engraving Toronto Pan Am Games on the bottom so they could serve as souvenirs of this summer’s big event.

The good wood, meanwhile, will see continued service as flooring, panelling, cabinetry, furniture and components of doors and windows (some of which will be produced by Neil Pope, whose Port Hope company makes historic windows).

“There are so many uses for this material, and we have only touched the surface,” Green said.

The functional possibilities are exciting, but Green appreciates the historic dimensions of this unique product.

He helped put together a display of for last month’s IDS design show in Toronto, to introduce this wood to craftsmen, builders and manufacturers who might like to include it in their own products. During his time at the booth, he held an informal contest, showing people a piece of the wood and asking how old they thought it might be.

Nobody guessed over 300 years.

The answer is probably 400 to 500 years — it was old-growth Douglas fir when it was originally cut down and shipped to the Toronto distillery more than 180 years ago.

It evokes a mental picture for him of men hewing down the massive trees by hand with axes, getting them out of the forest on wagons drawn by sturdy work horses.

The horse was adopted as the logo for Green’s company because of the fondness he and son Connor share for draft horses (both for ploughing matches and the low-impact lumber harvesting they still do).

In fact, one use of the so-called garbage wood was to create an inlaid horse design for the floor of their booth, which created a great deal of interest in their product.

The IDS show is planned to inspires designers and creative minds, Green said.

“The idea of the show was very modernistic, avant-garde in a way. But there was interest even in some of this modern design to implement small amounts of older-looking material. The architects were saying it’s refreshing to see we are maintaining the traditional approach.”

Green will return to Toronto with his wood on March 27 for the Cottage Life show. 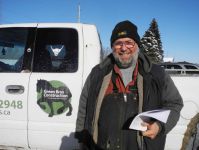