CENTRETON – A Cobourg builder and a Port Hope connection are bringing an old Centreton school back to life.

The old SS#18 in Centreton on County Road 22 had not been lived in for two years when Green Brothers Construction was brought on to the job. And while saving a 150-year-old derelict schoolhouse is a challenge, Rob Green reports that the new owner is determined to do so in a style that honours its roots.

According to a book compiled a decade ago on the old schools of Northumberland County, the local Retired Teachers of Ontario chapter said that SS#18 Centreton opened in 1857 and closed in 1966. A survey taken at its centennial year showed that, to that date, its graduates included two doctors, three dentists, one lawyer, three ministers, one civil engineer, two druggists, and four teachers.

They might have added information Green gathered from a woman who stopped by — a former student who pointed out that the acre of forest north of the building, which is still part of the property, was planted by the students themselves in the 1940s.

In fact, Green said, the woman is just an example of the occasional visitor they get, people who see the old school they used to attend being worked on and are glad to see it’s being taken care of.

SS #18 was distinguished by its separate entrance porches on each side of the front, the traditional separate girls’ and boys’ entrances, each with its own separate stairway down to the basement.

Leafing through the plans for the finished project, builder Russell Wright said that basement will now be an open area, off which two bedrooms and a bathroom will open.

The upstairs will have a kitchen and bathroom at the south end (where the entrances open), with an island separating the kitchen from a wide-open 14-ft.-ceilinged great room. A fireplace has been added to the west wall, and new doors in a style that echoes the windows will open on either side of it.

Above the building, on the new metal-shingled roof, the bell tower will remain. The owner has also kept the original light fixtures and blackboard.

Green is happy to say that his crew is enjoying the challenges of restoring the building, but there are many of them — such as the fact, for example, that the building was unoccupied for so long before they set to work.

The whole outside needed to be rebuilt, and the material was determined to be a no-longer-available kind of brick.

“We found out it was called Port Hope brick, and we are pretty sure it was made at a brickyard in the Port Hope area. They are pretty certain the brick came from there, because it’s an odd size. There are houses in Port Hope with a similar colour and size,” Green said.

“It was good quality, but not the best-quality brick made in that time frame. So it’s critical with this brick to be restored the way they originally built it.”

Even the mortar is an unfamiliar material, a lime-based compound.

“A lot of masons today use what’s called Type N mortar. But what the secret is to restoration work — and not many people know this, even masons, believe it or not — the mortar has to be softer than the brick. It allows the mortar to breathe out through the mortar joints.

“Type N or anything harder, and the mortar will breathe out through the brick instead of the mortar joint. This causes freezing, popping and bricks deteriorating.”

While it is possible to find lime-based mortar in Canada, Green opted to order it from England. He reasoned that they are far ahead of Canada in restoration work and that they make better-quality mortar that is probably more similar to what was used back in the day.

All the windows have been removed and worked on or, in some cases, replaced by newly built ones in the same style.

Green pointed out one of the original windows and explained what had to be done, the old paint and stain completely stripped, the single-pane glass and old weather-stripping replaced with thermal windows. The old window now opens and closes as smoothly as one could wish, because they have replaced the old rope-and-pulley mechanism with a modern spring balance to hold the windows open.

The tin ceiling still in place on the porch is the same design as the one that covered the upper-floor classroom ceiling but had to be taken down.

“There wasn’t any vapour barrier, and water leaking in rusted it. There were holes you could poke right through. We have taken down and salvaged about 70% of it,” Green said.

That portion will be reinstalled on the south end of the room. The north-end ceiling will be a reproduction tin ceiling designed to match it.

“My company is big on recycling as much as possible. We don’t have much garbage from the site. Wood that can’t be re-used we chip up and use in efficient wood-burning boilers to heat the shop. We will be able to build a fancy staircase to the basement from salvaged timbers from this building,” he reported.

And when it comes to recycling, another Port Hope connection saved the day on the brickwork.

“Years ago, they would make two types of brick. One was designed for exterior use, which was glazed clay put in a kiln and baked a little longer and hotter. Then there was the backup brick,” he said.

Fortunately, an interior brick wall that stretched the width of the classroom came down and supplied a lot of under-layer brick. But they found themselves still about 400 bricks short of what they needed for the job.

Fortunately Green found an old brick drive shed on County Road 74 west of Welcome. It had been derelict for some time but, once the roof blew off, the elderly couple who owned it had wanted it dismantled.

“We are cleaning it up free in exchange for salvaged bricks,” Green said.

“We got enough brick to finish this project, and a lot left over we can use on other projects. And that building is being recycled, instead of crushed and thrown into the garbage.

“The wood and floor joists and roof timbers will be used on other projects,” he added.

“It’s been a struggle but, if you are patient, you can find ways.”

“Most people would have bulldozed this house, it was so far gone. Five more years, and it would have collapsed,” he said.

“I am really happy to be working for her because of that respect. I am so fortunate to be part of this.” 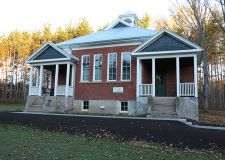