This house, near Pontypool, Ontario has been completely redesigned and rebuilt! …and it’s fabulous!

A “mid-century modern” house, built circa 1960, on a beautiful rural acreage was in sad disrepair when the new owners found it. Sited in an area of rolling hills and beautiful views, they decided this was a place they wanted to invest in. A collaborative effort ensued with Green Bros. as a contractor; Architect, Harry Lay; and Interior Designer Liz Rand and the result is stunning! Take a look at the photo gallery below and see if you agree. Green Bros. is proud to have been the trusted contractor on this project.

Oh, and see those laminated stair treads? They used to be part of the laminated ceiling beams. When we cut off these end pieces to facilitate the new design, we saw that they would make really nice stair treads – we don’t like to waste good material! 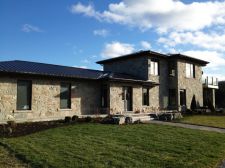