Not just your ordinary front porch

ELIZABETH RAND-WATKINSON
SPECIAL TO THE GLOBE AND MAIL
PUBLISHED MAY 4, 2007
UPDATED APRIL 25, 2018

Work on Serenity Cottage, the subject of our reno diary, is stalled while owner/contractor Rob Green tends to another project but, since porch weather has arrived, why not talk about porches. Or, more specifically, a special porch Mr. Green had the opportunity to work on last summer.

Many readers will agree that Port Hope is a rather special place. Heritage consultant and restoration architect Peter John Stokes has said it boasts “the best-preserved 19th-century streetscape” in the province. It also has the “best-preserved main street” in Ontario, an accolade bestowed by TV Ontario. This is thanks to the efforts of a plethora of dedicated heritage enthusiasts, including the Heritage Port Hope (HPH) advisory committee, the Port Hope branch of the Architectural Conservancy of Ontario (ACO), the Heritage Incentives approval committee (HIAC), and the town’s Heritage Business Improvement Association (HBIA).

It’s also thanks to residents who have the necessary mindset and will, which brings me to this special porch. It’s attached to the “Clemes duplex,” whose owners — Duncan Greene and Leslee Argue on one side, and Christian and Patricia Boos on the other — are equally dedicated to the preservation and historical detail.

The duplex, built in 1876 in the Second Empire style and located on a street renowned for its beautifully preserved and restored homes, stands out, in part, because of that porch.

Bus tours that normally cruise slowly down this street come to a full stop there so that passengers can take in the home’s overall ornate splendour. Unfortunately, the porch wasn’t always splendid.

In the 1960s, the then owners had the original porch removed, replacing it with an ordinary wrought-iron-railed creature that bore no connection to the home’s architecture.

For many historically sensitive souls, this replacement was an abomination, but it remained shackled to the house like a barnacle for years.

But the present owners came to the rescue, commissioning Craig Sims, a well-known heritage-building consultant from Kingston, to design a faithful reproduction of the original porch. It was a wise choice: Mr. Sims has no less than historical preservation work on the Parliament Buildings to his credit.

To implement Mr. Sims’s design, the owners hired master carpenter Rob Green (he can be e-mailed at www.greenbros@sympatico.ca) and his team, which included carpenter Stephen Archer and apprentice Rick Thomas. (Even Mr. Green’s young son, Conor, got into the act, carefully supervised, of course.) The team poured over old photographs of the home in its pre-barnacle days, magnifying them to hone in on the finer details of the original porch.

In addition to reproducing the original porch, the owners wanted the structure made watertight so that it would last another century. The materials and construction methods used were geared toward fulfilling this mandate.

The original porch would have been built of pine, a softwood. Mr. Green chose to make the deck of the porch with Douglas fir, a harder, more durable and rot-resistant wood, while using clear, select pine for other components. This expensive pine was supplemented with less-costly but knottier pine that one of the owners, Duncan Greene, had logged from his own woodlot.

So that only the best parts of the knotty pine became part of the porch, Rob Green cut away the knotty bits, winnowing out the clearest wood. Even with this added labour, using the self-logged wood saved thousands of dollars for the owners. The fact that the carpenters ended up with lots of short bits of pine wasn’t an issue because the complexity of the moulding work called for just that.

The craftsmen went the extra mile to protect the structure from future water damage and potential wood rot. For example, all joints were glued with West System resin epoxy (typically used in marine applications) to prevent their ever opening up. Every piece of wood was primed on all four sides before being installed. The bottoms of the porch’s support posts — structural elements particularly vulnerable to rain and snow damage — were thoroughly coated with more epoxy for protection that will last years.

And then Mr. Archer, the carpenter, went one unconventional step further. He said, “If I were to think like a drop of rain, where would I flow?” By thinking “fluidly,” he created gaps and reveals in the woodwork to foster the most efficient drainage possible. Some of these gaps and reveals were turned into aesthetic details, while others are entirely hidden unless you know where to look.

Paint was the finishing touch. As nothing but the best would do, the team employed Neil Pope, a Port Hope expert whose company, Neil Pope Carpentry Services ( http://www.npcservices.ca), specializes in restoration work. According to Mr. Green, the work by Mr. Pope and his team “made the porch sing.”

Some may say, “It’s just a porch,” but it’s much more. It’s as faithful a reproduction of the stunning original as it can be and that gives us a more accurate glimpse into the past. The Port Hope chapter of the ACO recognized this by bestowing its annual Marion Garland Heritage Award on the restoration this April. It’s also a testament to what can be achieved through vision — the owners’ — and teamwork, that of the caring experts they assembled.

This porch project can also be looked upon as a metaphor for what made Port Hope the heritage jewel it is today — the vision and teamwork of dedicated volunteers, citizens, and members of the local organizations charged with its preservation. 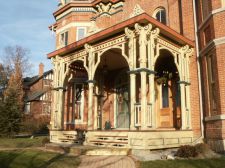